Lieut. Edward Brooks died in the Revolutionary encampment at Roxbury, Massachusetts, during Washington's siege of the British forces in Boston.2,3 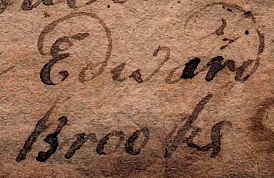 Signature of Edward Brooks, from a letter written to his wife from Roxbury camp in December, 1775, shortly before his death. Courtesy Patrick Comins.
Lieut. Edward/4s Brooks, born 16 Mar 1727/28 at Springfield, Massachusetts,(also rec. at Warren)4,1, "served in Lieut. Elisha Henley's Company, 1747-1748."5 He married, by 1750, Anna/5 Hayward, daughter of Ephraim/4 Hayward and Joanna/4 Wheeler, and a Mayflower descendant, with whom he had 11 children.6,7 Although the births of all these children were subsequently entered into Warren town records, their son Reuben (b. 1763) deposed in 1832 that he was born at Cublegate, Nova Scotia. Apparently the family went to Nova Scotia (as did several of Edward's brothers) and there remained for an undetermined period of time before returning to Warren.8
Lieut. Edward Broocks, of Western (now Warren, Massachusetts), was listed in the company of Capt. James Convers, Col. Ebenezer Learned's regiment, Roxbury Camp, Jan. 18, 1776; "commissioned Feb. 1, 1776 (also given Jan. 29, 1776); company raised in Brookfield and Western."3,2 He died in camp, probably of disease, about this time. (The Warren town record says Jan. __, 1776, at Roxbury Camp.)9 His widow died at Warren 28 Jan 1822, a. 88.10 They are buried in Pine Grove Cemetery, Warren Center. Her name is given as Howard on the stone; his inscribed date of death is incorrect.11,12
In December 1775, shortly before his death, Edward Brooks wrote his wife from camp; the letter still survives.

Loven wife[:] after my Love & tender regards to you and the rest of my family[,] Hopen these Lines will find you as well as through the great goodness of god they leave me at this time. Sylvenus [____] was here last night. He informs me that you are all well. I thank God for the comfortable tidings that I hear from you, and pray that God would continue his blessing upon us that wee may be the care of his kind providence, and pray that wee may meet again in this Life and enjoy in this world if it be his will, and enable us to say thy will be dun[.] So I leave you and recommend your case to God by prayer, that god will protect you in all your ways and that we may meet in a beter world than this is[.] I Have now news to Right to you - the cannan play on our army every day but they haven't plaid on Roxbery any sence wee came down here, but they drove out the man of war out of the harbor this day week, and they wounded too of our men and that is all they have don By firen Last week[.] Western men are all well at presant and I hop that they will Remain so there is nothing Strang to camps that has happened to us[.] I Should be glad that you would take as good care of the cattle as you can[.] I mi[gh]t have charged you first to take care of your selves[,] and as you have mony b[u]y bread when you can git it and Dont Miss any oppertunity for that artakel [article] Bread for as wee havent but won Life to live So Let us Live to day as tho wee [k]new that wee wase to die to moro[.]
my Dear Children I would have you Remember your Cr[e]ater in the Days of your youth[.] En dever as much as in you Lies to o bay all god commandments[,] in so Doing you will o bay your parence[.] this is to won and all of you that are com to yeres of undersanding[,] as I [k]now that som of you would never [k]now that they Ever had a father by any Remembrence that they Saw me[.] So I pray god to Direct you in all your ways and protect you threw your youth full days and keep you in his Richies [righteous] ways[.] So I Subscrib my Self your Loven husben and to my Children your tender and afattunat [affectionate] father Edward Brooks
In 1876, Edward's grandson James wrote a newspaper article entitled "An Old Letter," transcribing the letter, and adding his own reminiscences of an 1818 reunion between his father Asa and his three uncles, all Revolutionary War veterans. Click the PDF icon below to download the newspaper story. NOTE: This is a high-resolution, 17MB scan of the four pages of the issue. The J.F. Brooks article, on page one, begins in the second column from the right, near the top of the page, and finishes at the top of the rightmost column.13

2nd great-granddaughter of William White of the Mayflower. 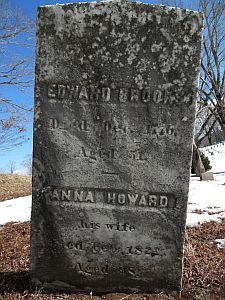 Findagrave.com, memorial #126471552. Photo by James Bianco. The inscribed date of death (Dec. 1776) was obviously carved when the stone was created after the death of Edward's wife decades later in 1822, and is incorrect. His contemporary town death record states he died in Roxbury camp in January, 1776. His wife's surname is also inscribed HOWARD, at the time a common substitution or alternate rendering of HAYWARD.
Anna/5 Hayward, born 11 Feb 1732/33 at Brookfield, Massachusetts,1, married, by 1750, Lieut. Edward/4s Brooks, son of Benjamin/3s Brooks and Hannah Walker, with whom she had 11 children.2,3 Although the births of all these children were subsequently entered into Warren town records, their son Reuben (b. 1763) deposed in 1832 that he was born at Cublegate, Nova Scotia. Apparently the family went to Nova Scotia (as did several of Edward's brothers) and there remained for an undetermined period of time before returning to Warren.4
Edward died circa Jan 1776 at Roxbury Camp while serving in the Army during the Patriot siege of Boston.5 Anna died at Warren, Massachusetts, 28 Jan 1822, a. 88.6 They are buried in Pine Grove Cemetery, Warren Center. Her name is given as Howard on the stone; his inscribed date of death is incorrect.7,8

F, #10, (31 May 1730 - )
Family Explorer
Hannah/4s Brooks was born 31 May 1730 at Springfield, Massachusetts,(also rec. at Warren).2,1
Springfield town records include a record of marriage, 22 Feb 1759, between Hannah Brooks and Thomas Dunham of Brimfield, son of Micajah Dunham and Mary (–?–). However, they also include, on the same date, a record of the marriage of Thomas Dunham of Brimfield to Sarah Brooks of Springfield.3 As children of Thomas and Sarah Dunham are recorded at Brimfield in an appropriate time frame following the marriage date, Sarah seems to have been the actual bride, and Hannah a copyist's error.