Thomas Dunham was probably born at Brimfield, Massachusetts, where an undated birth entry for him in town records precedes that of a sibling born 22 Jan 1738/9.1
The marriage of Thomas Dunham of Brimfield to Sarah/4s Brooks of S., daughter of John/3s Brooks and Rebecca Ferry, was recorded at Springfield 22 Feb 1759 (int. Springfield, 26 Jan).2 On the same date, however, Springfield records note the marriage of Thomas Dunham of Brimfield to Hannah/4s Brooks, daughter of Benjamin/3s Brooks and Hannah Walker.3 As children of Thomas and Sarah Dunham are recorded at Brimfield in an appropriate time frame following the marriage date, Sarah seems to have been the actual bride, and Hannah a copyist's error. 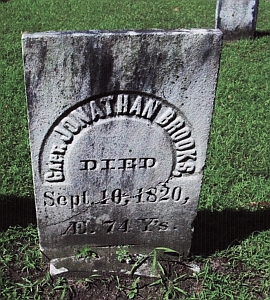 Capt. Jonathan/4s Brooks was born circa 1746 (g.s.), perhaps at Ware, Hampshire County, Massachusetts.2,3 He was mentioned in his father's will, 27 Nov 1750; assigned to the custody of his mother after his father's death the same day, aged under 14.4,5,1 He married, by 1773, Hannah/5 Strong, daughter of Nathaniel/4 Strong and Miriam Sheldon.6,7,2 Five children were recorded at Lanesborough, Massachusetts,between 1773 and 1784, though some may have been born elsewhere.6 (More than 40 years later he would testify that "previous to the commencement of the American Revolution he resided in Southbury in Connecticut."). The name of Jonathan Brooks appears in Lanesborough records as a Revolutionary soldier.8
The 1790 census recorded a household of Jonathan, two males under 16, and three females.9 In 1800 they were found at Swanton, Vermont.10 Hannah died 13 Aug 1807 (g.s.), "65 yrs."2,11 He died 10 Sep 1820 (g.s.), "74 yrs."2,11
His will, dated 7 Sep 1820 and proved 20 Sep, left $50 in lands to his deceased son Sheldon's widow Sally, the same to daughters Sophia Brooks and Caroline Brooks and grandson Norman Powell Sprague, and $100 in lands to Sheldon's son Lester. He left his son Calvin $20 in land off the west end of his Highgate lot, and his son Chester fifty acres of land adjoining Calvin's Highgate legacy on the east. Daughter Esther Stevens received a bedstead, feather bed and bedding belonging to it, as did Sally, wife of Chester Brooks, as well as a book, The History of the Work of Redemption. His desk he bequeathed to Chester. Finally he reserved for daughter Esther Stevens the right of residence in his house until settlement of the estate was completed. Witnesses were Wolcott Griffin, Rufus Deland and Esther Deland.12
Gravestones for Jonathan, Hannah and daughter Olive are found in Woods Hill (formerly known as Dorman) Cemetery, Swanton.11,13
On 28 Sep 1820, Benjamin Fay, one of the Executors, reported that the estate was insolvent, and commissioners were appointed by the probate judge to examine and adjudicate the claims against it. Jonathan's children Calvin, Esther and Chester were all mentioned in probate proceedings as being notified, and therefore living in Vermont at the time.12