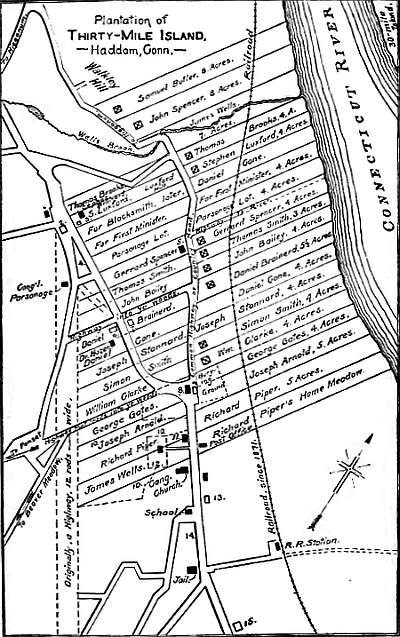 Map of the earliest settlers' lots, Haddam, Connecticut. The lot of Thomas Brooks extends from the highway south of Wells Brook (upper left) to the Connecticut River at upper right. (Brainerd/Brainard Family in America)
Thomas/1h Brooks, blacksmith, had a house at New London, Connecticut, 1659 and 60, and grants of land there in Jan and Feb 1661.1,2,3 Based on chronology, he is likely the Thomas Brook admitted freeman by the General Court at Windsor, 20 May 1658.4 4 May 1661, Samuel Lodwich sold to Thomas Brooke, both of New London, my old vessel for [illegible] shillings in full payment. On the same day Thomas Brooke relinquished all right in said bill of sale to Samson --?--.5
Thomas Brooks removed about 1661 to Haddam, Connecticut, where he was one of 28 original proprietors.3,6 He married (1), by 1661 (Torrey), Lucy (–?–)7, and (2), circa 1662, Marah/2 Spencer of Haddam, daughter of Ens. Gerard/1 Spencer and Hannah Hills, with whom he had 4 children.8,9 He died at Haddam 18 Oct 1668, intestate10,8,11, and his widow married (2), 1669, Thomas Shaylor.7,8
Thomas's inventory of £109-09-00 was taken by Simon Smith and George Gates.10 11 April, 1670, administration was granted to the present Husband of the Widow of sd. Brooks. Order for Distribution: To the Widow £32 and one third of the profits of the Land during life, she maintaining and bringing up the Children & teaching the daughters to read and sew and the son to read and write; to the son £22, and to each of the three daughters, £14.10

Various origins have been propounded for Thomas of Haddam, each an attempt to connect him to other known Brooks families. Shattuck, the historian of Concord, Massachusetts, identifies the Haddam man as "probably" the son of Capt. Thomas/1 and Grace Brooks of Concord; but no son Thomas is mentioned in Concord records or in the disposition of Capt. Thomas's estate. Nor are there known connections of Brooks family significance between Concord and Haddam at this time. Shattuck may have noted two men named Thomas Brooks, approximately one generation's difference in age, and concluded they must be father and son.
More plausible is the suggestion of a shared identity between the 1661 proprietor of Haddam and the 1635 Susan and Ellen passenger, aged 18, who with brother Richard Brooke went to Lynn, Massachusetts. There were migration links between Lynn and Connecticut, and Marah Spencer, who married Thomas Brooks of Haddam, was herself born in Lynn ca 1642. But as The Great Migration authors observe, "Nothing can be said about the history of the 1635 passenger beyond … 1636," so this association remains conjecture absent further evidence.
A third suggestion — that Thomas of Haddam represents a "lost" son of Henry Brooks of Woburn, Massachusetts — merits further attention, in the author's view. While no such son is mentioned in Woburn records or Henry's probate, Henry had two documented children who did have Connecticut connections at Niantic and New London. Thomas of Haddam had connections both with Lynn, just a few miles from Woburn, through his marriage (if not otherwise), and New London, where he lived. Furthermore, on 17 Jun 1668, one "Thom Broockes ae. 46 yrs." joined Isaac and John Brooks, sons of Henry of Woburn, in testimony in Middlesex County Court, Massachusetts. If this deponent was indeed both the Haddam man and the son of Henry, then he would have been born about 1622, and died at Haddam just four months after his testimony.12
Against these perhaps fanciful constructions must be weighed New London's location as a coastal port, and the possibility that Thomas came to New London from Long Island or even England, and is thus unrelated to the other Brooks families resident in New England at the time. 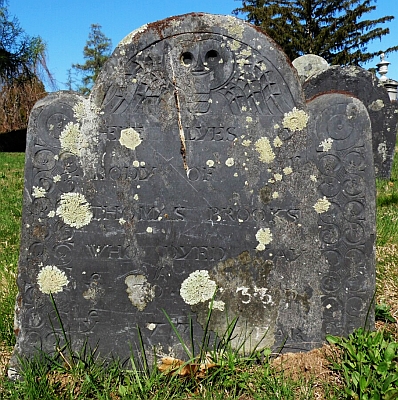 Dea. Thomas/2h Brooks Jr., born in Jun 1664 at Haddam, Connecticut,3,1, on 11 Apr 1670 received £22 in the distribution of his father's estate. The boy's mother, who had remarried, was to maintain and bring up the children, and teach the daughters to read and sew, and the son to read and write.1 The will of his uncle John Spencer, circa 1682, enjoins Thomas Brooks, whom his sister Brooks committed to his care at the age of 4 years and whom he has brought up to the age of 18 years, to show all respect to his mother, now wife of Thomas Shaylor; but the two years time which he was to have lived with his Uncle he now gives to himself; also gives him 20 shillings, and desires his overseers to take care of him because he is too young to be wholly set free.4
Thomas married, 16 Nov [Barbour; Mar, Torrey] 1695/6 at Haddam, Susanna/2 Arnold, daughter of Joseph/1 Arnold and Elizabeth/2 Wakeman.5,1,6 He was a petitioner, 13 Oct 1698, with Daniel Brainerd Sr., Thomas Clerk, John Bates and Nathaniell Spencer, for the General Court to mediate Haddam's division over ministerial rates. The seriousness of the dispute is illustrated by the fact that Deputy Governor Robert Treat was appointed to head the court's factfinding committee.7
Thomas Brooks witnessed, 23 Nov 1708, the will of Josiah Arnold of Haddam.8 His own will, dated, 24 Feb 1728/29, bequeaths to wife Susannah the use of my dwelling house, barn and shop, and all that part of land hereinafter given to my son Jabez as his portion, for and until he shall attain to the age of 21 years if he live so long, or till she shall be married again, which shall happen first; a loom, and half the tackling belonging to two looms; one-third of his moveable estate; and, "if sd. Jabez arrive at the age aforesd. and she remain still my widow, the use of one end of my dwelling house (which she shall choose), viz, two rooms, so long as she shall continue my widow."
"As touching my eldest son Thomas, I have already by deed of gift settled his inheritance upon him, reserving 8 Pounds to be paid by him to me or my order. As to my son Abraham, I have already by deed of gift settled his inheritance upon him, reserving 9 Pounds to be paid by him to me or my order."
To son Jabez, all my land lying southwestward on his brother Abraham's land, butting theron northwesterly, butting northeast partly on the Great River and partly on land of Capt. James Welles, and butting on land of Capt. Caleb Cone southeast, he to pay to his only sister Eunice 10 Pounds in money at the age of 18 years. To son Joseph all my lands and rights of land within the bounds of Haddam, which is not by me already disposed of, except the sixth division lott laid out upon my list which lyes near Flag Swamp.
To daughter Mary, over and above what I have already given and done for her, 20 shillings. To his other five daughters, viz., Elizabeth, Susannah, Thankfull, Sarah and Eunice, all my moveable estate not hereinbefore disposed of, and also 8 Pounds in money to be paid them by their brother Thomas, and 9 Pounds in money to be paid them by their brother Abraham.
"And whereas, two of my sd. daughters, viz, Elizabeth and Susannah, are deceased, I do will and determine that their children, viz., Elizabeth Lester and Susannah Smith, shall have their mother's equal part of my estate and that the 17 Pounds in money last mentioned be equally divided and paid to my sd. daughters and sd. grandchildren, Mary and Eunice not to have any part thereof, but are hereby exempted." Wife Susannah and son Thomas, executors. Witnesses, Caleb Cone, Caleb Cone Jr., and Elisha Cone.9
Deacon Thomas Brooks died at Haddam 6 Apr 1734, a. 69.1,10

Exhibit(s).
• Will, inventory and probate.11