In 1718 Thomas Brooks, with Stephen Hotchkiss and Matthew Bellamy, on behalf of the residents of West Farms, unsuccessfuly petitioned the assembly to be "constituted a distinct society." In 1723 the appeal was renewed, and the General Assembly persuaded to allow the formation of a new parish, which, at the urging of Thomas Brooks, was named Cheshire, in honor of his father Henry's birthplace.2 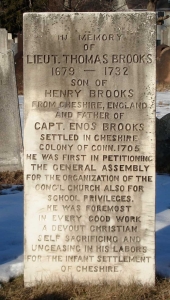 Findagrave.com, memorial #23689754. Photo by Marc Ryan.
Lt. Thomas/2c Brooks was born 27 Mar 1679 at New Haven, Connecticut,3,1, where he married, 25 Mar 1702, Martha Hotchkiss, daughter of Joshua Hotchkiss and Mary Pardee, with whom he had 11 children, each of whom lived to marry.3,4
In 1723, Thomas Brooks, Nathaniel Bunnell and John Hitchcock were appointed "a Comtee to manage ye affairs of the society for the year insuing." Oct. 10, 1723, Thomas Brooks and others petitioned to erect their own meetinghouse. In the meantime, a Congregational church was gathered, consisting of 11 men and 15 women, which met at the homes of Thomas Brooks and John Hotchkiss. Thomas Brooks was a member of the committee which arranged to settle Mr. Hall as their first minister, 4 Dec 1723.5
Thomas died at New Cheshire (later Cheshire) of smallpox, 20 Jul 1732 (c.r.), a. 53.3,6 He is buried in Hillside Cemetery, where his g.s is inscribed, Son of | Henry Brooks | from Cheshire, England | and father of | Captain Enos Brooks | Settled in Cheshire | Colony of Conn. 1705. | He was first in petitioning | the General Assembly | for the organization of the | Cong'l Church also for | school privileges. | He was foremost | in every good work | a devout Christian | self sacrificing and | unceasing in his labors | for the infant settlement | of Cheshire.7 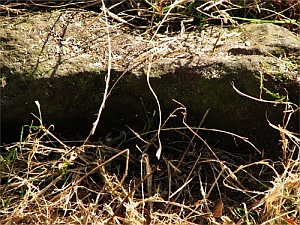 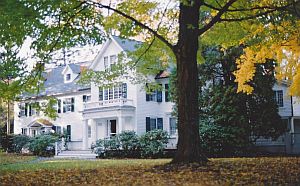 Front view of the (much-enlarged) house of Capt. Enos Brooks, Cheshire, CT. Today owned and occupied by Jean McKee, a 4th great-granddaughter, the house has been continuously occupied by a descendant since its builder's death. Photo by Carol Piacentini.

Capt. Enos/3c Brooks, born 15 Feb 1708 at Wallingford, Connecticut,2,1, and baptised with 9 siblings 30 May 1725 at the Congregational church, Cheshire2,3, married, 3 Jul 1734 at Wallingford, Tamar Wooster of Derby, daughter of David Wooster and Mary Lobdell.2,4
He was ensign of the south company, parish of New Cheshire, town of Wallingford, May 17515, and captain of the same, May 1760, his brothers Cornelius and Thomas serving as lieutenant and ensign in the same company.6 He was Wallingford deputy to the General Assembly, 1754–5, 1756, 1758-60, and 1764.7
Enos Brooks attended the General Assembly of 21 Jan 1756, where war plans against the French were presented by the Governor after the body had been sworn to secrecy. While approving the proposed offensive operations, the delegates protested that "the expence of this Colony was so great in the last year's operations, and necessarily drawn out beyond the abilities of the Colony, that the inhabitants are loaded with large taxes laid on the next four years as sinking funds for bills of credit emitted for carrying on those services, and that an emission of a larger quantity of such bills may lessen their value and injure the possessors, it is therefore hoped that the pay of the troops, supply of arms, ammunition and carriages, may be undertaken at the expence of the crown, and for that end it is thought expedient that his Excellency General Shirley be applied to and solicited on this subject."8
Enos died at Wallingford 27 Sep 1771, a. 632,9, and Tamar 7 Oct 1775, a. 68.10 They are buried in Hillside Cemetery, Cheshire.2,11 The house he built in 1733, now considerably enlarged and located in the Brooksvale section of modern Cheshire, has been continuously occupied by descendants to the present.12