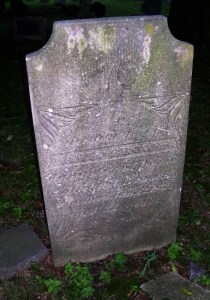 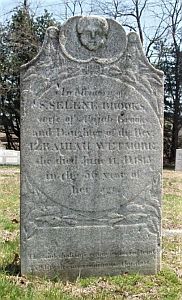 Hannah Raymond, born 21 Nov 17451, married, 19 Sep 1764 at Connecticut, Lemuel/4f Brooks of Norwalk, son of John/3f Brooks and Anna Sherwood, with whom she had 10 children.2 He died 9 Oct 1815.1
22 Nov 1837, Hannah Brooks of Norwalk, aged 92 the preceding day, made a declaration to claim a Revolutionary widow's pension. She says she is the widow of Lemuel Brooks, that they were married 9 [19 per town record] Sep 1764, and that her husband died 9 Oct 1815. Her declaration states that Lemuel Brooks, "a resident of Norwalk, Connecticut, at the commencement of the Revolution, was a seafaring man and while on a return voyage from the West Indies, was captured off Block Island, September 5, 1775, by the man-of-war 'Rose', conveyed to Halifax, after two months of imprisonment, made his escape and returned home. He took command of a privateer at New Haven, in which he made one cruise. During 1777 and 1778, he served as Assistant or Deputy Commissary under Commissary Daniel Gray, also during 1780 served as a private in Captain Uriah Raymond's company, and during 1781 as sergeant in Captain Eliakim Smith's Company on the alarm list, and was in service when Danbury, Fairfield and Norwalk were invaded."1
The claim, however, was not allowed, "as she failed to furnish sufficient proof of six months actual military service, as required by the pension laws."1 Hannah died 11 Nov 1841, a. 95.1 Her son Lemuel Jr. also filed a supporting declaration with additional service details.1 Jul 1853, Ann Miller of New Haven, aged 77, daughter and heir-at-law to Hannah Brooks, gave power of attorney to Wilson H. Clark of New Haven "to investigate, substantiate, demand and receive" any Revolutionary pension benefits due her mother for her father's Revolutionary service.1

Ann/5f Brooks, born 6 Sep 1775 at Norwalk, Connecticut,1, there married, 29 Dec 1796, Dr. Phineas Miller of Norwalk.2,3 Jul 1853, Ann Miller of New Haven, aged 77, as daughter and heir-at-law to Hannah Brooks, widow of Lemuel, gave power of attorney to Wilson H. Clark of New Haven "to investigate, substantiate, demand and receive" any Revolutionary pension benefits due her mother for the claimed Revolutionary service of her father Lemuel, which claim had been denied for lack of proof.2